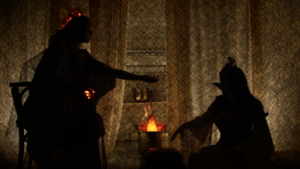 Introduction The main story is based on a Hindu deity named Agni, who represents the fire energy.

Agni rides a goat that is his faithful servant. His goat represents the earth’s firepower and energy. Agni is sometimes represented with two heads and six arms that symbolizes his duality of nature of fire. Warmth and destruction. In this context, that duality is performed by two different characters, Agni and his servant goat. The rooms where these two characters act represent a “spiritual world”, a parallel dimension. Take into account that in the original story there´s no gender differentiation, however in our story both characters represented are women. 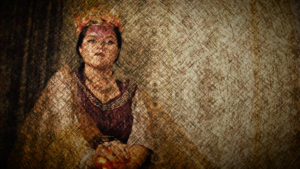 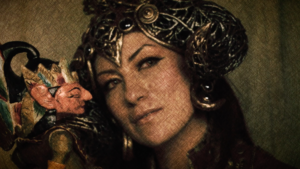 Agni’s silhouette is displayed against the curtains. Her servant goat opens a chest and gives her an insect as an offering. Agni devours it. A flame comes out of her mouth representing the power of fire that incinerates everything.

Agni asks for more objects to devour. The servant goat finds something in the chest. A puppet that seems interesting. She’s fascinated by its form and beauty because it reminds her of humanity. She falls in love with the puppet and doesn’t want to offer it to Agni. She plays with the object and seems to be happy, enjoying that short moment. Agni’s fury is visible through her eyes and holds her royal mace tight, showing her discontent.

Again, Agni demands for more objects to devour and punishes the servant with her scepter when she refuses. The puppet is thrown back in the chest and it stays there, for a while…

In the meantime, in another room, Agni and her servant goat look at themselves in another mirror. It is at this time that the servant goat realizes she is Agni’s alter ego. They sing. To soothe and entertain the fire god´s energy/fury, the servant goat plays the harmonium in a gesture of submission. Meanwhile, the puppet (representing humanity) escapes from the chest and recovers its freedom. Agni and her servant don’t even notice it.

Further in another stay, they continue discovering their duality, looking to each other through a window and trying to merge into one new entity. In fact they become one and dance moving their multiple arms. 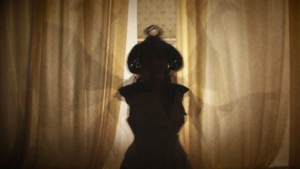