The season of shows is coming towards a vacation time, as we’re having a few weeks of rest from extensive gigging, and now it feels like a right time to have some flashbacks – for those of you, who due to your geographical location couldn’t attend our shows. 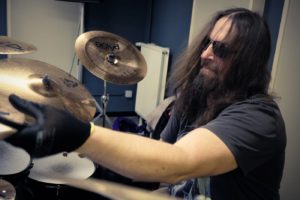 It has started in a curious way, as sometimes the unexpected changes can play in one’s favour. In case of Fabulae Dramatis, it has been exactly this way, perhaps from the start. After the release party, and with the departure of the session drummer Sepp, whose duties with his own band seemed to have clogged the opportunities of our further cooperation, we’d appear stranded. The very next week after, we gathered up at our usual rehearsal hub in Antwerpen, to discuss the further cunning plans and meet up with Miro Svetlik, not so young, but energetic and aspiring sound engineer, who’d help us setting up technical tits and bits of the backline. We could never expect the solution for our line up gap problem to literally knock at our door – in shape of two stranger seasoned souls, musicians who happened to rehearse next door and wanted to listen to our work, and then appeared to be brilliantly interesting and interested, which consequently lead for one of them – drummer Teo Dimitrov – to fill the vacant drum chair in Fabulae Dramatis. The result was there, the line up was unexpectedly full again, the momentum was gained, and the first rehearsals were set. Adding Teo to Fabulae Dramatis’ ranks changed the band’s sound to feel more like progressive rock, moving it a little away from the metal side, while still maintaining a reasonable heaviness and Isabel’s signature growlings. After merely two rehearsals together, I sensed we were ready to go, when I told the unsuspecting freshly recruited drummer that our first show is, in fact, already booked and is due in two weeks. I knew this would motivate the band to work more effectively, and wasn’t wrong, as we have had our live set prepared and steady in time to take off for what would become the first in the set of many live shows in Belgium during the springtime.

The following shows were lovely and kept us on a road for more than a month, with some weeks break to follow up with another month of sweaty concerts. Some of the shows from this season stuck in my memory, so I wanted to share these experiences with you, as certain episodes are still fresh. 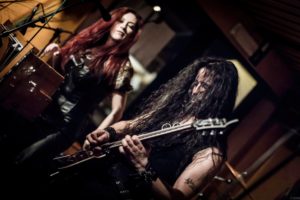 Leuven has embraced us in its historical music club Libertad, a small venue with firm reputation, and a house for many live shows on local stage, a fantastically cosy venue with serious, for its size, sound. While the guys were searching for always hard-to-find parking possibilities in this students’ capital of Belgium, I sat in the bar enjoying the unexpected Rishloo blasting from the speakers, which appeared to be set to play by the progressive rock loving lady behind the counter, whose musical erudition wowed me to the point of having spent solid forty minutes of chatting with her after the show. The house was packed, and we were happy to see some familiar faces travelling from other cities to see us live once again. 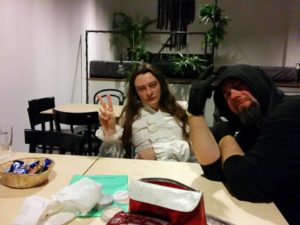 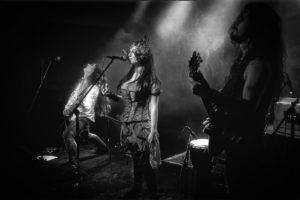 Trix of Antwerpen, one of the central venues in the city has invited us to play an after party for folk metal bands Arkona and Korpiklaani, who were on their European tour, so we were honoured to accept the offer. The show went smooth, with some gothic-looking ladies giving Isabel quite a sensual dance partnership on stage during our metal tango Roble Para Corazon, and a tight bunch of cheering intoxicated crowd of metalheads enjoying their progressive metal afterparty. Teo, for whom it was the first show on the bigger stage after years of hiatus was wee nervous during the makeup fuss in the backstage but did a great job in the end!

Freshly built musical club De Stam in Limburg province was rememberable for several reasons. It was the where we first met and shared the stage with the fantastic symphonic metal band Cathubodua. I was surprised by the size of the crowd, impressive, given the venue’s location, and also about has quickly this place has been established to quite an attractive live venue, as I still remember the place under construction back in 2013 with love.blood.live tour with Transport Aerian, when we have had happen to play in the same town. The owners and the organizers did a great job with setting up a comfortable stage, sound and overall nice place to be, with necessary blackbirds singing their throats out in the small field right outside the venue’s front doors! The less bright day in our musical journey was the appearance on Femme Rock Battle, organized in the depths of Wallonian suburbs by the dutchy individual, who is mostly known as the founder of the homonymous festival, supported by otherwise respectable LeCercle. I must say, I despise musical contests in general, firmly believing Bela Bartok’s quote that competitions are, in fact, for horses, and not artists; but we’ve decided to give it a shot anyway. The murky clouds of that-kind-of-day has started to assemble right upon the arrival, when we’ve encountered a friendly but slightly irritated crowd of Luxembourg musicians, who have informed us that there is still no certainty in line up schedule, sound, and other conditions sine qua non. Sulky boys and girls of inevitably soon-to-be-favoured Solitude Within sat in their van parked nearby, as the atmosphere started to gain the electricity of impeding kerfuffle. Brief examining of the stage revealed a lone semi-dysfunctional drum kit whose worn out heads felt like mountain pass miniature upon the touch, and a several dust-covered boxes that would later pretend to be monitors. The sound tech, who showed up later looked slightly nervous about the situation, and the fact that he wouldn’t speak any word of English, while nearly none of the present musicians were francophone did not help. There was a lot more of what I could say regarding the quality of this event, but I will leave it behind the curtains of obscurity for ethical reasons. However, we had our fun on stage, played a solid set and the crowd seemed to be very supportive, regardless of. After taking a two week break we continued our adventure, this time including, among the others, legendary Gent’s Asgaard, one of the most acknowledged metal stages in the region, and it was quite an honour to headline the evening, being supported by young proggy aspirants of BufferState. After the show, I’ve had my obligatory spinal tap moment, tripping on a wet grass and slipping down waist-deep into a stagnating canal on the way from the venue, which caused quite a damage to my concert clothes, moral and hygienic state, for the rest of the road home. I give my kudos to Daniel who had to put up with my slightly muddy looks and the unbearable swampy stench that had been flooding the car all the way home. 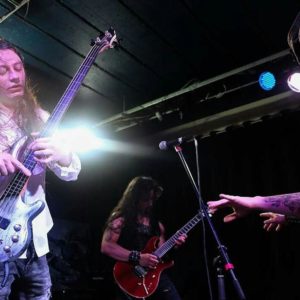 Finally, our spring season of shows has been closed on the remarkable charity event, set up in The Other Side by BMU, as a part of the European charity shows in effort to raise money for cancer treatment for Bret Hoffmann, a fellow metal singer. According to the last news, Bret has passed away, succumbing to the disease, despite all the efforts, but I still find it significant that such solidarity on metal stage exists. The show was energetic. Band line up was inspiring with Cathubodua and Fat Bastard headlined the evening, with our sad absence on the reportedly brilliant performance of the latter due to the extreme late hour! These are but sparkles of memories of some of our live appearance, but I must wrap up my story, to leave out some for the imagination. We had a good time supporting Solar Time’s Fables, but we want it to be just a start of the journey, as we’re working towards the possibilities of hitting other European countries, so that you, dear followers could also have an opportunity to drop by one of our shows and shake our hands in person, rather than watching us, separated by the fourth wall of computer screens.

We are going to make it happen. See you there. 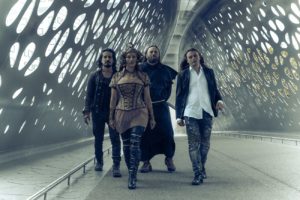