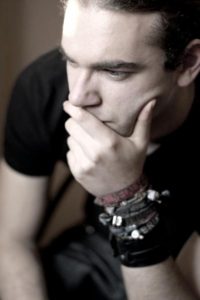 Thomas Hubert is the growl singer of a Belgian orchestral black/death metal band called “Orion’s Night”. He also participates in a groove death metal band named “Exostosis”, which is about to record its first demo.

Hubert joined Orion’s Night in July 2010 to replace the previous singer. He played his first live concert just 3 days after joining the band, without having performed live or even sung before.

Thomas’s current activities include studying graphic design and working as a barman in a metal bar in Liège, city where he resides. His biggest singing influences are Peter Tägtgren (“Hypocrisy”, “Pain”), Christian Älvestam (“Solution.45”, “Miseration”) and also almost every growler of the actual metal scene. He also appeared several times on stage with other Belgian bands such as “Cadaveric Rampage” and “Spitdown” to do some guest vocals.”

Hubert has a powerful and dark growling voice, which has been just the perfect touch that Fabulae Dramatis was looking for. Combined with some hard rock and dramatic voices of Hamlet and Isabel, Thomas’ screaming chant is the deepest catalyzer to get the desired final result, which you can listen to in the preview of our album opener song, called “Bastion”.

All pictures by Mariya Frantseva.
Fabulae “under construction” Daniel Díaz, Between The classical, The roughness and The Psychedelia.