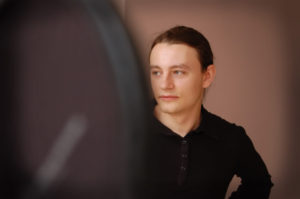 More than a year ago I received an e-mail from a person called Isabel Restrepo and which contained an offer to participate in an experimental project as a producer.

Back then, being busy with promotion of the recently released album of my project “Transport Aerian”, I couldn’t work with anything more than that, but I accepted the offer. True collaboration began a year later…

…Originally, I was planned to be sound producer to bring my special avant-garde vision to the music and provide the quality, which differed my works from ocean of others. Since the project lacked a bassist, I overtook that position as well.
The first 3 tracks originally belonged to Isabel’s previous band, “Horus” and were slightly revamped and rearranged by keyboards player Andres Silva, with whom she collaborated some years ago in a project named “Spiritual Ashes”. After mixing those tracks, where I only was involved as a bassist, we came to the idea of developing something more than just a couple of songs.

The idea of an album that would combine elements of metal, progressive rock, avant garde music and world music of various kinds came up. “Fabulae Dramatis” was born. To work on further songs, and to add more of different touches, we invited many incredible musicians from all over the world, playing various genres of music. About all of them you can read in more details in Fabaulae Dramatis’ official blog.
To give more of my personality to the album, I eventually added parts of different instruments, played by myself, evolving from the project’s producer and bassist to guitar player (in addition to magnificant guitars played by Daniel Díaz), keyboards player and even singer, as my voice can be heard on such songs as “Vigil”, “Labyrinth”, “Ixquic” and “Bastion”. And of course, Isabel’s powerful voice, her touch of harmonium, sitar and her experiments with different vocal techniques fascinated me and I’m sure as a result, we will have an absolutely powerful and amazingly new, fresh musical piece. Add here an incredible art work designed by Marcela Bolívar and Carlos Jácome and you’ll get an outstanding album.