A Change Of Season

This year has passed – perhaps, a little faster than it should have but it was colourful and fruitful time for us. Just a year ago, we set off to the open sea of possibilities putting together a plenty of shows and playing everywhere we could, to tighten up the bonds between the members of our live line up, and to make the female fronted stage notice rookie on the block. During this year we’ve played with several fantastic bands from Belgium and from abroad, including even some from across the ocean.

We all knew that as much as Solar Time’s Fables’ live representation was pretty fresh and as field tests showed, it worked well, it was a right time we started developing something new. The meetings were set, the brainstorming commenced, the directions were taken. The first meetings between our members determined that we want to work towards another concept album, which is to merge various cultural references from our diverse backgrounds  and is to be vaguely based on a rather obscure Russian novel dating from the 1940. 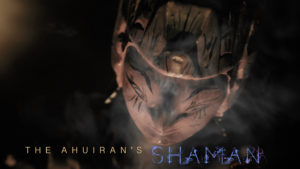 At this point it feels like we aim simultaneously at several moving targets. First, the series of short clips preceding something slightly bigger has been launched. More will come, and we are not yet ready to tell what this is about, but we can for sure promise for it to be a feast of visual designs in the theatrical style we are known for. You can follow this series here.

Second, we will be eventually publishing some videos of live shows as reminiscent of Solar Time’s Fables live programme. A full DVD is not promised, but certainly some insight into how our live shows look like for those who unfortunately still had no opportunity to see us live. Everyone from all over the world who supports us – we’re thinking of you and consider it a small present from our side!

Finally, and this is most exciting part for us. Not only the brainstorming and first sketches of the coming album have been put together. While the work on the album as a whole is at the embryonic stage at this point, we have already managed to compose and finalize a few new songs, one of which, namely a piece right from the middle of the coming album has been recorded and is to be released as the first sparrow of the spring in the coming season.

It will be different. It will be conceptual. It will be progressive in our spirit. And this time we worked exclusively with the same line-up as we do our lives shows, with the production by Bart Van Lier already known by producing our second album.

These are the news – for now. A full studio report alongside with the release date of our new eye and ear-candies will come soon.

And we hope your summer will be just as exciting and colourful as ours.

Christmas Times And Roadmap Towards The Horizon. Fabulae Dramatis announcement