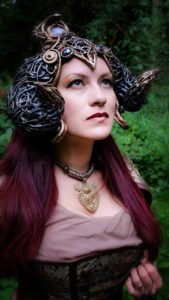 Singer, multi-instrumentist and video producer born in Medellín, Colombia in 1982.

Leader of Fabulae Dramatis, a Progressive/Avant-Garde Musical project based in Belgium. She sings, plays sitar, harmonium and improvises with some other instruments such as djembe and saxophone. “Om” was Fabulae Dramatis’ first studio album, which was released in September 2012. “Solar Time’s Fables”, is the second LP released on 30th September 2017.

“Horus”, “VenenuM” and “Stigmatas of Dissaor” from Honduras, Central-America were some of the musical projects she participated in, being at that time (2003) the first front woman of a Metal band in that country.

Restrepo finished her 6th year in classical music education in 2017 at the Music Academy in Antwerp, Belgium where she studied classical singing and general music culture. She also graduated as Camerawoman at the Media School in 2016 and as Social-Cultural worker in 2015 in the same city. She’s currently studying Film & Video Art at the Academy of Fine Arts and working in a social-cultural organization.